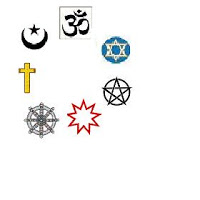 
As Fall Semester starts again, we are now coming upon the start of the cycle of holidays once more. For many of these holidays (those from religions that follow calendars that differ from the Gregorian calendar), the dates in the secular year will differ but the main content of the posts should not.

Similarly, I have left out some holidays that are regionally of importance within a religion but not of such significance beyond the regional context..  For example, I have left out the Feast of Our Lady of Guadalupe (December 12) which is primarily observed among Mexican Catholics. Likewise excluded is Bathukamma  (this year on October 17) which is primarily observed among Hindus from Telangana state in India.

The list below gives the date for 2018, the name of the holiday, the main religion observing the holiday and the previous David Victor Vector post on that holiday.While the dates on the links may be from an earlier year, all of these are regularly updated, and all are corrected for the date when it changes.

Sunday, September 23
Kshamavani/Forgiveness Day
Jainism
No link as yet

While the links to many of the holidays above were posted in earlier years, they are regularly updated as the holiday approaches for this year. The dates in this post are (to the best of my knowledge) correct for 2018.