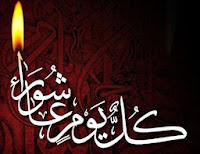 Because Arabic does not transliterate consistently into other languages, Ashura is also commonly spelled as Ashoura or Ashurah. In India, where it is a national holiday, it is often known as Moharram and in the Caribbean (especially Trinidad & Tobago and Jamaica) the holiday is called Hosay.

Sadly this holiday has often been marked by sectarian violence. With this in mind, I have given below a list of the many Ashura attacks since 1994.

While Ashura is celebrated by all Moslems, it is of particular importance to Shi’ites for whom it is one of the most important holidays of the Moslem calendar.

For most Moslems – Shi’a and Sunni alike -- Ashura is believed to be the date that Nuh (Noah in the Jewish and Christian tradition) had his ark come to rest after the Flood.   It is also believed to be the birthday of the Moslem Prophet Ibrahim (who is the same person as the patriarch Abraham of the Jewish and Christian Bible). Some Moslems believe that Ashura will be the date on which Qiyaamah (doomsday) will take place (although this position is rejected by many others).  Finally, Ashura is widely believed to be the anniversary of the creation of the Ka’aba, the holiest structure in Islam and the center point of the haj to Mecca.

For Shi’a Moslems, Ashura is the anniversary of the murder of Husayn ibn Ali at the Battle of Karbala in the year 680 (61 AH in the Moslem calendar).  Husayn ibn Ali (born in 626) was the grandson of the Prophet Mohamed and is considered by Shi’ites to have been the Third Imam and thus the rightful successor to the Prophet.  As this is one of the centrally defining beliefs of Shi’a Islam, Shi'ites believe that (what they view as) the martyrdom of Husayn is symbolic of the sacrifices needed in the face of all that is unjust, oppressive or ﻿ ﻿repressive.


For Shi’ites, Ashura is a mandatory fast day and a day for mourning.  Many Shi’ite traditions also include public gatherings of men who beat themselves on the chest, cut their heads and similar activities to share in the pain that Husayn ibn Ali experienced. The Ashura page on the Holiday Year website has a selection of some (moderately graphic) images of worshippers cutting themselves in worship here.

Many Shi’ite traditions include special chants accompanied by drumbeats and stage performances reenacting the Battle of Karbala.

Most Sunni Moslems also celebrate Ashura, although they do not usually recognize anything to do with Husayn ibn Ali.  For Sunnis, Ashura marked the 10th day (Ashura actually means 10th in Arabic) of the Hejirah, when Mohamed fled with his followers to Medina.  He found the Jews there (on Yom Kippur) fasting in what the Moslem tradition considered to be in remembrance of Mûsâ (Moses). Islam recognizes Mûsâ/Moses as a prophet for Islam as well as Judaism. Indeed, the Quran mentions Mûsâ/Moses 136  by name, by far the most of the 25 prophets mentioned in the Quran (only Ibrahim/Abraham comes close with 69 direct mentions).  It is for this reason (with nothing to do with Husayn ibn Ali) that Sunnis have an optional fast on Ahurah.  It should be noted that Sunnis – while they feel no religious importance with the death of Husayn ibn Ali -- do regard his death as a sad incident of historical significance.

Indeed, because of its significance, for centuries, worshippers have gone on pilgrimage to Karbala, Iraq to the shrine of Husayn’s martyrdom there.

As a side note, under the regime of Saddam Hussein, Ashura pilgrimages were banned because Saddam (probably at least in part rightly) interpreted the demonstrations at Karbala as expressions of protest against not just tyranny in general, but as specifically against those who considered his own rule tyrannical.  Only in 2004, with the fall of Saddam Hussein, were Shi’ites allowed again to make the pilgrimage to Karbala.  Sadly, 2004’s pilgrimage was marred by widespread violence including bomb attacks among the pilgrims which killed 170 people and wounded over 500 others.

Because of tensions between Shi’ites and Sunni Moslems, Ashura has sadly been marked by violence between the two groups in recent years.


Ashura last year, 2018,  was one of the first to be free of a major outburst of sectarian violence.

This sadly was not the case in 2017,​ with attacks in both Afghanistan and Pakistan.​ ​There were two ​separate attacks in Kabul, Afghanistan. The first was a bomb attack leaving three dead including two policeman. The second, an explosion in the city's Pamir Cinema left 16 injured.​ The attack in Pakistan took place in Quetta, the provincial capital of Baluchistan, where two men riding a motorbike gunned down Shi'ite vegetable sellers.  ​
Likewise in 2016 gunmen opened fire on worshippers at a Shia shrine in Kabul, Afghanistan. The attack left 14 dead and over 40 injured.

The year 2015, was similarly marred by deadly attacks on worshippers. In Pakistan, there were two major attacks. In Jacobabad, a suicide bomber killed 23 (including 10 children) and injured 40 at a Shia worship procession. In Saihat, Saudi Arabia, an Islamic State gunman attacked Shia worshippers proclaiming their mosque an "infidel temple" and killing five and injuring nine others.  In Dezful, Iran, drive-by gunmen shot into a crowded Shia Ashura ceremony, killing two worshipers. This was particularly unusual as Iran is a majority Shia country.  Meanwhile, in Dhaka, Bangladesh, three bombs were detonated among a crowd of Shia worshipers, killing one and injuring 80. In Dakosoye, 20 miles outside of Nigeria's capital Kano, Boko Haram suicide bombers killed 21 Shias as the walked in a worship procession. In Shaab, Iraq, a suicide bomber claiming allegiance to Islamic State injured 23 Shia worshippers (IS claimed 20 were killed but there was no evidence for that).

In 2014, attacks took place in Saudi Arabia, Iraq and Nigeria. Armed with machine guns in Al-Ahsa, Saudi Arabia, gunmen killed five Shia worshippers and injured nine more. The event was captured on video and had widespread distribution on social media. In Baghdad, Iraq multiple attacks took place including a truck bomb at a checkpoint killing 20 and injuring 53, and a bomb hidden at a refreshment tent for Shia worshippers which killed four more people. The following day, multiple car bombs went off in Baghdad at Shia hospitality tents for Ashura worshippers in the Sadoun, Saidiyah and Sadr City neighborhoods, together killing 28 and injuring 67. In Potiskum, Nigeria, a Boko Haram suicide bomber killed 27 and injured 80 others as they worshipped at a Shia Ashura service.

Similarly, in 2013, several attacks including a suicide bombing left 41 worshippers dead in Karbala, Iraq. At the same time, a suicide bomber in Diyala Province, Iraq left 32 dead and 96injured.  In Pakistan a Sunni mob attacked a Shi'ite procession in Rawalpindi, Pakistan leaving 10 dead and 80 injured.

In 2012, a bomb attack on a Shi'ite procession in Dera Ismail Khan in Northwest Pakistan  left seven people dead (including three children) and over 30 injured. On Ashura, 2011, in two separate attacks in Afghanistan and one in Iraq, Shi'ites were targetted. In an unusual targeting of Shi'ites in Afghanistan, 63 people were killed and over 100 injured in separate attacks in Kabul and the normally peaceful Mazar-i-Sharif.  Meanwhile in Iraq, in Hilla, two car bombs targeted Shi'ites. Hilla is a city on the pilgrimage route to Karbala. The first hit a crowd of mostly women and children killing 16 and injuring 46; the second (involving two coordinated bomb explosions) killed at least six more and wounded 18.  Seven additional bombs were set off among Shi'ites in three separate locations in Baghdad killing at least 8 and injuring 18 more. Finally, a gunman on the outskirts of Baghdad opened fire on Shi'ites marching in a procession toward Karbala, killing two and wounding four.

The modern history of sectarian killings on Ashurah began with the 1994 attack in Masshad, Iran when a prayer hall bombing murdered 25 worshippers.

Over the last decade, a partial list of violent sectarian attacks on Ashura would include:


'
As in past messages, I am summarizing a complex and deeply held set of beliefs here, but I still hope that you continue to find these messages of value.

Ashura.com is an entire website devoted to the holiday:


Islam House presents some information (though with a strong position taken against traditional beliefs such as the belief that it will be the date on which Qiyaamah will take place) on Ashura at
http://www.islamhouse.com/p/52966

Other sources that may prove of interest are at


For coverage of the 201​7​ ​Pakistan​ attack, please see:​ ​https://www.yahoo.com/news/five-dead-attack-targeting-shiites-pakistans-southwest-085242234.html


For coverage of the 2016 Afghanistan attack, please see:https://www.theguardian.com/world/2016/oct/11/afghanistan-gunmen-kill-fourteen-people-shia-shrine-ashura-kabul


For coverage of the 2015 Pakistan attack, please see:https://www.thenews.com.pk/print/15352-10-children-among-23-killed-in-jacobabad-suicide-bombing


For coverage of the 2015 Nigeria attack, please see:https://www.theguardian.com/world/2015/nov/27/nigeria-suicide-attack-kano-shia-muslims


For coverage of the 2015 Iraq attack, please see:​ ​http://www.reuters.com/article/us-mideast-crisis-iraq-violence-idUSKCN0SK1G720151026


For coverage of the 2014 attack in Nigeria, please see: http://imnig.org/ashura-bomb-attack-potiskum-nigeria-dozens-mourner-killed-many-injured


For coverage of the 2012 attack in Pakistan, please see:http://www.guardian.co.uk/world/2012/nov/24/pakistan-bomb-kills-seven

The image of Husayn ibn Ali is from the Damascus in History and Pictures website (Husayn's skull was for many years preserved in Damascus' Ummayad Mosque):
http://syria.ewas.us/Damascus.history.pictures.htm

The image of the Imam Husayn Shrine is from the free-usage files at Wikipedia at
http://en.wikipedia.org/wiki/File:Kerbela_Hussein_Moschee.jpg