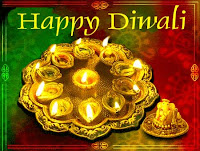 As part of my ongoing announcements on religious observances, I want to bring to your attention that the Hindu celebration of Devali begins in 2014 on October 23 and runs through October 27.

The festival of Devali  (also called as Diwali, Deepavali, Divali, Diwali and -- in Nepal -- Tihar or Swanti) is the most important holiday in the Hindu calendar. It is also an important holiday for Jains and Sikhs.

The holiday should not affect class or work attendance, but may be observed by many students who practice one of these three religions.
Diwali Traditions

Devali marks the last day of the Hindu calendar.  The holiday can last up to five days and celebrates (at least in part) the victory of light over darkness and good over evil. In much of (and especially in the North), the business community starts their financial new year with the holiday, and it is the beginning of the fiscal year.

Devali is celebrated throughout the Hindu world, regardless of region (which is not always the case for other holidays).  Divali is an official holiday not only in India and Nepal which both of majority Hindu populations, but also in Singapore, Sri Lanka, Trinidad & Tobago, Malaysia, Guyana, Mauritius and Fiji.
﻿

Various traditions for celebrating Devali include lighting of oil lamps (diyas or jyothis), setting off of fire crackers, exchanging and eating decorated sweets, gathering at people's holiday-decorated homes in celebration and visiting .   In different parts of , the holiday is marked by the giving of gifts of new utensils (especially cooking utensils), wearing of new clothes and/or the cleaning and painting of homes or workplaces. Many cities and towns also hold Devali melas or open-air fairs during Devali.

For most Hindu traditions, Laxmi (or Lakshmi), the goddess of prosperity is especially revered on Divali. With homes with children, people often leave female footprints on the floor after the children have gone to sleep so that when they wake up they will see that the goddess Laxmi has visited the home in the night.
﻿

Special foods are often eaten. Some of these are widely eaten throughout . For instance, regardless of region, it is customary to eat things that are sweet such as gulab jaman, which is usually made of milk dough soaked in rosemary, sugar syrup and cardamom. A recipe for gulab jaman can be found at:

Also, specialties made with cashews or pistachios are also widely eaten for Divali. In much of , delicacies are made from Lord Krishna’s favorite food Poha (also called Foav or Pauva) which is pounded semi-cooked sweetened rice and eaten on the second day of the festival.

Other Divali food specialties are more regional.  For example, in much of the north of India, people eat patandas made of flour, unprocessed sugar cane and ghee as well as poodas (or mal poohas) made of flour and sugar syrup and eaten with chutney. In the far south of , many sweets are eaten leading up to Diwali and into the first day, notably those made from honey and unprocessed sugar cane.In a special mix of cane sugar and coriander seeds is customarily eaten on the first day. In Rajasthan, many people traditionally begin the holiday by eating Mawa Kachori, a puffed pastry made with sweetened evaporated milk (mawa) and nuts. A recipe for Mawa Kachori can be found at:


Devali has three religious stories attached to it.  First (and especially in ), the holiday commemorates the victory of Lord Krishna over the demon king Narakasura, and so the victory of good over evil.

Second (and especially in North India), Devali celebrates the return after 14 years of exile of King Rama and his wife Sita and brother Lakshmana after a war in which King Rama killed the demon Ravana.  Because it was dark as they returned, people lit oil lamps to light their way and thus the link of light over darkness.

Third, in Bhavishyottara and Bramhavaivarta Purana holy writings, Devali is associated with Daitya king , who is allowed to return to earth once a year.

For Hindus, each of the five days carries a different significance. The first day throughout is customarily dedicated to honoring Dhanavantri (also called Dhanvantar), the physician of the gods and the source of the Ayurveda (in Sanskrit, “the complete knowledge for long life”). Because of its association with Dhanavantri, the first day of Divali is often known as Dhanteras and includes the ritual lighting of oil lamps and veneration of the goddess Laxmi in her owl form. As with most pujas, Lord Ganesha – the deity who removes obstacles – is given honor at the opening of the holiday.

In many Hindu traditions, the first day of Devali includes the ritual of Deepdaan in which worshipers light oil lamps for each member of their family and for often for their ancestors then set them afloat (usually) in a river or pond. Another Hindu tradition practiced in much of is the giving of gold and jewelry gifts to bring about prosperity, making Devali a major day for jewelers.  In northern and , many Hindus celebrate Yamadeepdaan in which lamps are dedicated to the god of death Yamraj (or Yam) and kept lit all night long. In the far south of India, many Hindus celebrate the days leading up to Divali as Asweyuja Bahula Thrayodasi, dedicated to the god of finance Lord Kubera in which shopowners whitewash their business, recite a special mantra to Lord Kubera and give coins to honor the goddess Laxmi. In , Divali coincides with the Puja Kali. While the rest of honors Laxmi on this day, in , Hindus honor Kali the Destroyer goddess of time and change.


For many Hindu traditions, the second day of Devali often begins with ritual bathing before the sun comes up, with an anointing of oil and scrubbing of the body with ubtan (a mixture of fragrances with grains or rough flour). In , as part of the Puja Kali celebrations, the second day is observed as the day the goddess Kali destroyed the demon Raktavija. Regardless of tradition, this is the traditional day for cracking open crackers (of the sort used in on Christmas Day) and for setting off of firecrackers.

The third day of Devali for most Hindu traditions centers on the veneration of Laxmi. This also marks the anniversary of the death in 1883 of the founder of the Arya Samaj Hindu Reform Movement Swami Dayananda Saraswati.  The followers of the Arya Samaj therefore often mark the day as a day of remembrance for him.

The fourth day of Devali is celebrated in many Hindu traditions with a special Govardhan Puja. This puja commemorates Lord Krishna’s defeat of the rain god Lord Indra by lifting . Some interpretations (there are many variations) explain that Lord Krishna needed to defeat the Lord Indra because the rain god had become to arrogant and filled with self-pride. In doing so Lord Krishna taught worshipers to pray to more than just the rains by embracing the whole of nature. This celebration is also called Annakut (literally meaning “pile of grain”) because people in many parts of decorate a mountain of grain symbolizing .

On the fifth Day of Devali comes the Bhai Duj or Bhai Teeka, a final day of celebration. On this day traditionally, brothers visit the houses of their sisters to honor them and bring gifts. Sisters in turn feed their brothers special delicacies. The celebration commemorates the visit on this day of the death god Lord Yama to his twin sister Yami (also called Yamuna or Yamini), the first woman. Lord Yama gave his sister a special gift that whoever visited her on this day would be cleared of sins.

For Sikhs, Diwali is recognized as commemorating the release from prison of the sixth guru, Guru Hargobind, and 52 other princes with him, in 1619. Guru Hargobind had been imprisoned in 1617 by the intolerant Moghul Shah Jahan, who saw the Guru and his followers as a threat to Islamic rule.

Whatever your tradition,  Happy Devali!

For Hindu traditions, you may wish to look at
http://timesofindia.indiatimes.com/diwali/eventcoverage/10244929.cms

For Sikh tradtions and the story of Guru Hargobind, turn to
http://www.allaboutsikhs.com/sikh-festivals/the-sikh-festivals-divali-bandi-chhorh-divas

For Jain traditions, turn to
http://www.jainuniversity.org/diwali.aspx

http://www.huffingtonpost.com/nikhil-bumb/jain-perspective-diwali_b_1032617.html
The opening clipart in this post comes from
﻿http://www.101kidz.com/holidays/diwali/clipart.html

The clipart of Guru Hargobind Singh can be found at
http://www.sikhphilosophy.net/general-discussion/14347-happy-diwali.html

The closing clipart is from
http://www.indiainimages.com/blog/2010/05/diwali/happy-diwali/
Posted by David A. Victor, Ph.D. at 3:31 PM