The Significance of Christmas

Christmas commemorates the birth of Jesus. Across all sects of Christianity, Jesus is believed to be the Savior and Redeemer of humanity. He is viewed by Christians as the Messiah prophesied in the Hebrew Old Testament. In Greek, Messiah is Christos, shortened to Christ in English. Christians of almost all persuasions believe that Jesus is the Son of God the Father who was born incarnate on Christmas Day to the Virgin Mary.

The Christian Bible itself has no indication of how to celebrate Christmas. As a result, Christmas has taken on an extremely wide variety of customs around the world. For some, the day is celebrated only on Christmas Eve and Christmas Day. For many traditions, the Christmas season is celebrated for 12 days through January 6 with the holidays of Epiphany and El Dia de los Reyes. Called Christmastide, this period is reflected in the English Christmas Carol “The 12 Days of Christmas.” A wide variety of rituals, gift-giving practices, decoration and songs (or carols) mark the holiday of Christmas as it is practiced throughout the Christian world, varying from place to place.

For today’s blog, we will discuss the significance of the date of Christmas.

For further discussion of how Christmas is celebrated around the world as well as the origins of some of these customs, please see my post "Christmas Customs Around the World" at:

And for a bit of background on the origins of the historical Saint Nicholas and his metamorphosis into Santa Claus, please see "The Real Saint Nick":

The majority of Eastern Orthodox churches will celebrate will Christmas on January 7. This is the date for the Russian, Coptic, , Ethiopian, Moldovan, Ukrainian, Serbian, Macedonian and Georgian Orthodox churches. Their traditions will be discussed in a separate blog.

Both religious traditions agree that the date of December 25 is Christmas. The difference is that the Orthodox churches do not accept the Gregorian calendar (the secular calendar) as religiously accurate.

When Was Jesus Born? 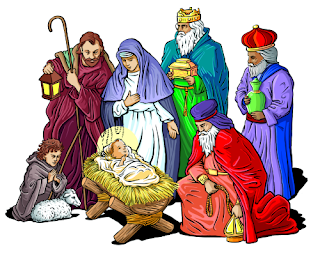 The Nativity in the Gospel of Matthew

The Gospel of Matthew mentions only a general period, the reign of Herod. Most of Matthew’s attention rests on what occurred before and after the Nativity: the birth of Jesus itself is mentioned only in passing as one part of one verse.

“Now when Jesus was born in Bethlehem of Judaea in the days of Herod the king…”
-- Matthew 2:1

The rest of Matthew 1:18-25 primarily discusses the reaction of Mary’s husband Joseph who had not yet consummated his marriage and who received the inspiration to name the as-yet-unborn child Jesus. Matthew 2:1-16 primarily deals with the three Magi coming to , the resulting anger of Herod and the flight of Mary, Joseph and the baby Jesus to .

The Nativity in the Gospel of Luke

The Gospel of Luke alone among the books of the New Testament gives much attention on the Nativity. The Gospel of Luke devotes extensive coverage of the events leading up to the birth of Jesus, including its prediction, the Annunciation to Mary and many other details.

Moreover, Luke is the only book in the Christian Bible that gives an event against which the Nativity can be dated, as Luke indicates that the birth took place during the Census of Quirinius:

In those days Caesar Augustus issued a decree that a census should be taken of the entire Roman world.  (This was the first census that took place while[a] Quirinius was governor of Syria.)  And everyone went to their own town to register. So Joseph also went up from the town of in Galilee to Judea, to the town of , because he belonged to the house and line of David.  He went there to register with Mary, who was pledged to be married to him and was expecting a child.  While they were there, the time came for the baby to be born,  and she gave birth to her firstborn, a son. She wrapped him in cloths and placed him in a manger, because there was no guest room available for them.  And there were shepherds living out in the fields nearby, keeping watch over their flocks at night.   An angel of the Lord appeared to them, and the glory of the Lord shone around them, and they were terrified. 1 But the angel said to them, “Do not be afraid. I bring you good news that will cause great joy for all the people.  Today in the town of a Savior has been born to you; he is the Messiah, the Lord.  This will be a sign to you: You will find a baby wrapped in cloths and lying in a manger.   -- Luke 2:1-12 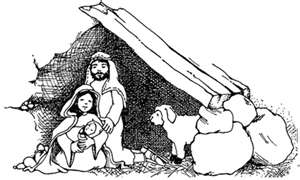 Unfortunately, no historically acceptable record of the Census of Quirinius can confirm the exact year, but the 1st Century Romano-Jewish historian Flavius Josephus who was born in 37 AD only shortly after Jesus’ crucifixion records that the Census of Quirinius likely took place in the year 6 or 7 AD.  Thus Jesus would not have been born in the year from which we mark the divide between BC (Before Christ) and AD (Anno Domini or Year of our Lord) but either six or seven years later.  In this regard, the abbreviations BCE (Before the Common Era) and CE (Common Era) used by many non-Christian societies is actually more accurate, since, for instance, the year 5 AD is -- historically speaking -- still before Christ.

Also, Luke never names a specific date for the Nativity, although he does give considerable detail about how Mary and Joseph go to Joseph’s hometown of for the census and, finding nowhere to stay there, spend the night in a manger where Mary gives birth to Jesus.

The significance for Luke is less the specific date and year of the birth as much as the fact that Holy Family spent the night of Jesus' birth not even in a barn but in an animal feed station. It is important to stress that in almost all Christian traditions, it is of great significance that Jesus -- the Messiah of humanity -- was born in humble origins.

Pope Saint Julius I, Chrysostom and the Selection of December 25

The date of December 25 was finally fixed upon only officially by Pope Saint Julius I who was pope from 337-352.

For Orthodox Christians, this position was confirmed by Archbishop of Constantinople Saint John Chrysostom in his sermon at in 386.

Several theories revolve around how this date was adopted. All that we can definitively say here is that there is nothing in the New Testament that would point to that date.

While it is not known how Pope Saint Julius I originally decided on December 25, historians suggest three theories relating to:

The first and arguably the most widely-spread theory on the dating of Christmas suggests that Pope Saint Julian I selected December 25 to coincide with the pagan holiday of Saturnalia which ran from December 17-23. Saturnalia honored Saturn, the Roman god of abundance and good harvest.

Saturnalia was a very festive occasion with widespread celebrations and gift-giving. By choosing December 25, Pope Saint Julius I, historians have argued, was attempting to co-opt and make holy the pagan rites.

Some historians have suggested that Jesus was born during the Jewish holiday of Chanukah, the Festival of Lights, which generally falls in late December. For more on the Jewish holiday, please see the blog post: http://davidvictorvector.blogspot.com/2011/12/chanukah.html

Those who theorize this suggest that Pope Saint Julius I was attempting to co-opt the Jewish holiday rather than Saturnalia -- or together along with Saturnalia.  This theory suggests that this was an effort to take a pre-existing Jewish tradition and imbue it with a Christian significance. Jesus is often associated with light as a symbol.  The Gospel of John explicitly makes this connection:


Then spake Jesus again unto them, saying, I am the light of the world: he that followeth me shall not walk in darkness, but shall have the light of life. -- John 8:12

Thus, the association of the Jewish Festival of Lights with light as a symbol of Jesus had a theological significance to it for Christians.

Some historians have suggested that the selection of December 25 as the birth date of Jesus resulted from efforts of early historians to date Good Friday.  No date was actually given for Good Friday either, although it was easier to calculate against the Jewish Passover that Jesus would have celebrated on that date. Even this was unsure since the actual year was never actually known and since their calculations gave two different dates: either March 25 or April 6. With March 25 becoming the more widely accepted calculations, the early Christians then backdated Jesus’ birth by nine months under the argument that Jesus would have died on the anniversary of his conception. 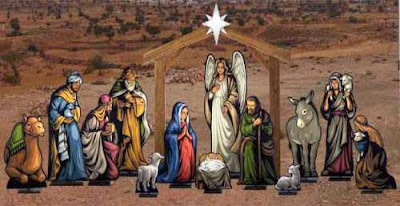 “The Origin of Christmas”:
http://www.happywink.org/christmas-day/origin-of-christmas.html

“Christmas” from The History Channel
http://www.history.com/topics/christmas#a0

“Was Jesus Born on December 25?” on “All About Jesus Christ” at http://www.allaboutjesuschrist.org/was-jesus-born-on-december-25-faq.htm

Nissenbaum, Stephen, The Battle for Christmas: A Cultural History of America’s Most Cherished Holiday, Vintage Books, 1996.

Bart Shaw, "Shall We Have Christmas?" from Christian Landmark: An Evangelistic Effort: http://www.christianlandmark.com/2009/12/23/shall-we-have-christmas/