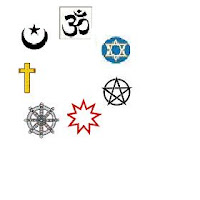 Beginning two years ago, I have posted overviews of many of the religious observances for Bahai'ism, Buddhism, Christianity, Hinduism, Islam, Judaism, neo-Paganism, Sikhism and Wicca.

As September approaches again, we are now coming upon the start of the cycle of holidays once more. For many of these holidays (those from religions that follow calendars that differ from the Gregorian calendar), the dates in the secular year will differ but the main content of the posts should not.

I have noted only holidays to which I have already written a post. These are those holidays that I would argue are the most important holidays within their religion. Admittedly, there are others which may be of strong importance to those who observe them. Thus, I was unsure whether to include the Christian holiday of Advent Sunday on December 1 (let me know if you think I should write up a blog post for this or others like it if they are important to your own religious practice).

Similarly, I have left out some holidays that are regionally of importance within a religion but not of such significance beyond the regional context..  For example, I have left out the Feast of Our Lady of Guadalupe (December 12) which is primarily observed among Mexican Catholics. Likewise excluded is Onam (this year on September 16) which is primarily observed among Hindus from Kerala state in India.

The list below gives the date for 2013, the name of the holiday, the main religion observing the holiday and the previous David Victor Vector post on that holiday.

October 14 sunset through October 15 sunset (depending on the sighting of the moon)
Eid al-Adha/Festival of the Sacrifice
Islam
http://davidvictorvector.blogspot.com/2011/11/eid-al-adha.html

November 13 sunset through November 14 sunset (depending on the sighting of the moon)
Ashura
Islam, especially Shi’a
http://davidvictorvector.blogspot.com/2012/11/ashura-2012.html

While the links to many of the holidays above were posted in earlier years, they are regularly updated as the holiday approaches for this year. The dates in this post are (to the best of my knowledge) correct for 2013.

Finally, I would like to ask you to spread the word about this blog. If you are not formally a follower, please do add your name to the list through your Google, Twitter, AIM, Netlog or Yahoo account at

Email ThisBlogThis!Share to TwitterShare to FacebookShare to Pinterest
Labels: calendar, Fall 2013 holidays, religious holidays, When is