Saint Patrick's Day: Some Background to the Holiday 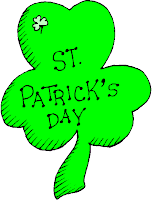 March 17, is Saint Patrick's Day. Within the Roman Catholic Church, the holiday commemorates the life of the 5th century missionary Patrick. Patrick is believed to have been largely responsible for the conversion of to Catholicism. Saint Patrick, as a result, became one of the three Patron Saints of Ireland. He is also the Patron Saint of Nigeria, because Roman Catholicism was introduced there primarily by Irish missionaries. Saint Patrick is also venerated within the Eastern Orthodox Church.

This article explains the background to the holiday as well as an explanation of the historical Saint Patrick. 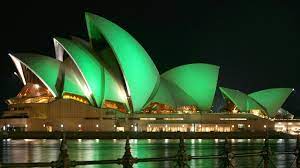 The initiative began with Australia's Sydney Opera House (shown above) to now 85 countries participating in the Global Greening initiative as of 2021.
As discussed in the blogpost, though, for 2022, the Greening initiative requested participants replace their Irish green with the blue and yellow of Ukraine to mark that country's unprovoked invasion by Russia. 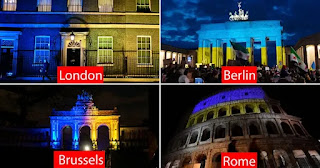 For celebrations around the world, including 301 parades held across the United States as of 2019 (some closed since COVID and others reopened in 2022), please see my post https://davidvictorvector.blogspot.com/2019/03/saint-patricks-day-parades-and.html

Patrick's date of birth is unknown, although backdating from his letters recording his enslavement at the age of 16, we can assume it was in or near 387. March 17 -- Saint Patrick's Day -- is actually the date of his death, which most scholars put as 460 (although some church historians place the date at 493, which would have made him 106 at his death).

What we do know of Patrick is that he was born in Roman-occupied Britain and, at 16, taken captive and brought to Gaul. He lived in Gaul for 6 years when he escaped, and came to Ireland. His own account of his escape from captivity indicates that he heard a supernatural voice in the middle of the night telling him to run off and make his way to the seacoast 200 miles away, and that he would find a boat that would take him waiting there.

Patrick obeyed the voice and, making it to the sea coast, found a boat waiting there but the penniless Patrick was refused passage on it. Distressed, Patrick prayed and, as if in response, the crew called out to him saying that they had decided to take him "on trust" and brought on board. He was taken to somewhere on the coast of Brittany and apparently fell briefly back into captivity there.

It was at this time that Patrick received his second otherworldly visit. This time he had a vision of a supernatural man called Victoricus who came to Patrick and handed him a parcel of letters. Patrick read the first letter which began with the words, "The voice of the Irish." While reading this, he heard multitude of voices speaking "as one" saying:

We entreat thee, holy youth, to come and henceforth walk amongst us.

This was the start of Patrick's ministry, as he knew from this that he had to go to Ireland to convert the people there to Christianity. Still, Patrick did not immediately go to Ireland. Instead, he traveled to Italy in or near 430 where he spent several years studying under, among others, Saint Germain. Once adequately prepared, he left for Ireland, arriving there in 432 at a small island north off the coast of Dublin in what is now called Holm Patrick in his honor.

Patrick wandered the countryside in Antrim and its environs making converts, and eventually making his way to the Hill of Tara, the holiest site in Irish paganism. On Easter, Patrick had a confrontation at Tara with the Irish pagan bards and priests hosting their celebration of the holiday of Beltain. Patrick, attended by eight Christian priests and a crowd of his converts, confronted King Laeghairé of Connaught the chief priest and poet of the Irish rites. The pagan leaders greeted Patrick with a warm welcome and civility and allowed him to share his message. To this, Patrick shared the story of Jesus with them. None of the pagan leaders converted but they were impressed enough with Patrick's manner and intensity of belief that they gave him permission to preach in their lands without interference.Soon after this, Patrick converted the two daughters of King Laeghairé. This was a great breakthrough since converting the nobility of Connaught allowed for considerably greater credibility among other potential converts.

From Connaught, Patrick traveled to the Kingdom of Munster where he met with King Aengus as the pagan holy site and seat of power of the kings of Munster: the Rock of Cashel.  The story of Aengus' conversion is one of the most well-known in Patrick's life.While the saint was baptizing King Aengus, he set his crozier firmly into what he had thought was the ground but what actually turned out to be the king's foot. When Saint Patrick looked down and saw the end of his crozier speared through the king's bleeding foot, he was shocked and asked the king why he had not said anything. King Aengus explained that he had thought that the piercing of his foot was part of the ceremony.  Following the conversion of King Aengus to Christianity, the king ordered the conversion of all of Munster. The persecution of those who did not convert did much to spread Christianity much more quickly in Munster than in Connaught where toleration of both Christianity and pagan religions were allowed. Today, the Rock of Cashel is a point of pilgrimage for Roman Catholics with an ancient church built on the spot.

In his later years, Saint Patrick went to a retreat at Saull where he wrote hisConfessio. It was there too that he passed away. He was buried at Downpatrick in County Down, supposedly next to Ireland's other two patron saints: Saint Columba and Saint Bridgid.

As always, I am delighted to hear your thoughts on this. If you have any points I should add, please let me know for the future... or if you just want to say that you liked this (or not), I would love to hear from you.

Also, if you would like to share a tradition in your family or just give mention to a St. Patrick's Day parade or festivity in your hometown, please feel free to add it in the comments section. 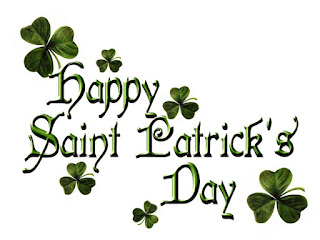 Rock of Cashel: My own photograph