December 8 is the major Buddhist religious holiday of Bodhi Day.

Bodhi Day is one of Buddhism’s three major holidays, and Buddhists in the workplace and school should be accommodated for worship.

Bodhi (बोधि) means "awakening" or more generally interpreted as "enlightenment" in both Sanskrit and Pali (the Buddha's own language), and some variant of the phrase "Bodhi Day" is used in most Buddhist traditions. That said, in Zen Buddhism, Bodhi Day is known as Rohatsu and in Tendai and other Japanese Buddhist traditions, it is known as Shaka-Jōdō-e.

The Buddha's Attainment of Bodhi

Bodhi Day commemorates the day in 596 BCE on which the 35-year-old Prince Siddhartha Gautama after searching for Dharma (the truth) for six years, attained Bodhi (which in both Sanskrit and Pali roughly translates as "awakening" or “enlightenment”). Following 49 days of unbroken meditation beneath a pipul fig tree, discovered the Four Noble Truths and the Noble Eightfold Path that are the basis today Buddhism.

For the last seven of those days, Prince Siddhartha stared at the tree without blinking, after which he was attained Bodhi. From this point Prince Siddhartha became the first Buddha (which in both Sanskrit and Pali means “the Awakened One”).
As Professor Takashi Miyaji of the Institute of Buddhist Studies put it in an interview with NPR's Scott Simon on Bodhi Day 2020,

And so this is where he awakens to the middle path and the path of moderation. And then he goes to underneath a Bodhi tree and says to himself, I am not leaving from this place until I attain awakening and finally does so one morning. And we say that that day is on December 8.


It should be noted that while Bodhi Day is important in both branches of Buddhism, the holiday is often held to be especially important in Mahayana (vs. Theravada) Buddhism. Mahayana Buddhism is most traditionally associated with the Buddhist traditions of China, , , , , , and north .

The Bodhi Tree and Its Descendants

The original Bodhi Tree grows near the banks of the Falgu River under which the Buddha sat to attain enlightenment once grew at the site of what is now the Bodh Gaya.  The site itself is Buddhism's most sacred point of pilgrimage.

The direct descendent of the tree -- called the Mahabodhi Tree -- is now located on the grounds of the Buddhist religious complex of the Mahabodhi Temple in the Indian state of Bihar. Additionally, there are three other trees grown from  cuttings of the original tree.

Sri Mahabodhi Temple Tree at Bodh Gaya
The tree marking the spot of the Buddha's enlightenment has had a temple surrounding it for over 2200 years. The original temple called the Bodhimanda Mahabodhi Temple was built in about 250 BC by the Maurya Dynasty Buddhist Emperor Ashoka the Great.

That said, the tree presently growing at the site of the Buddha's enlightenment dates only to the year 600 AD and is the fourth tree to have stood on the spot. Soon after King Ashoka build the Sri Mahabodhi Temple, his queen -- Tissarakkha -- became jealous of the attention given to the tree, and had the first tree destroyed. As recorded in the Nibbana of the Thera, "the treacherous Tissarakkha" did so with the thought

-- Nibanna of the Thera, Chapter 20 http://lakdiva.org/mahavamsa/chap020.html

The tree miraculously resprouted on the same spot.

After the death of Asoka, the Hindu Sunga Dynasty came to power in northern India, ruling the area including Bodh Gaya. Some say that King Pushyamitra Sunga, founder of the Sunga Dynasty, had the Bodhi Tree chopped down sometime in the 2nd Century BCE. It should be noted that conflicting historical opinions exist as to whether this actually occurred. Both sides of this debate, however, believe that the tree dates back to the original tree either because it still was the original tree (i.e., it was never chopped down by Pushyamitra Sunga) or because it was propagated from a cutting of the original tree.

There is no debate regarding the next cutting down of the Bodhi Tree  In 590 CE, the religious intolerant monarch Shashanka founded the Gauda Kingdom (the first unified Bengal kingdom). He carried out a series of attacks on Buddhists in his lands, paying 100 gold coins for the head of each Buddhist monk brought to him and destroying all of the stupas in his lands. During this period of persecution of Buddhism, Shashanka had the Bodhi Tree chopped down in the year 600 CE. The tree that stands at the site today was planted soon after from cutting of the original tree.


Following the Islamic invasions of India -- especially following those of Muhammad bin Qasim (695-715 CE) -- the original temple was largely abandoned and fell into disrepair. In the 1880's during the British rule in India, the current temple was restored and expanded.  Since 2002 been a UNESCO World Heritage Site.

Other Descendants of the Bodh Gaya Bodhi Tree
﻿

Two cuttings from the Bodh Gaya tree were transplanted and grown at two other temples within the first two centuries following the Buddha's death. One of these is at Sravasti in Uttar Pradesh in India. The city (called Savatthi in Buddha's lifetime), was the sixth largest city in South Asia at the time that the Buddha preached. It was the center of area where most of his teachings were given. The site remains an important pilgrimage site for Buddhists ever since, and is a UNESCO World Heritage Site.

The other cutting of the original Bodh Gaya is at Anuradhapura in Sri Lanka. The Bodhi tree at Anuradhapura was planted in 288 BCE, where it was brought by Ashoka the Great's daughter Sangamitta Thera at the request of the Buddha's disciple Ananda. Called the Jaya Sri Maha Bodhi or simply the Ananda Bo Tree, it has been continuously protected and monitored. This makes the Anuradhapura tree the world's oldest known angiosperm tree with a verifiable history. It is a major Buddhist pilgrimage site and is a UNESCO World Heritage Site.
In modern times, one other descendant of the Bodhi Tree has been transplanted. In 1913, the Sri Lankan Buddhist preacher Anagarika Dharmapala brought a cutting of the Sri Lankan Jaya Sri Maha Bodhi tree to Honolulu, Hawaii, where he gave it to the American Mary Foster. Anagarika Dharmapala was the first major Buddhist speaker to preach internationally in both Europe and North America as well as in Asia, and Foster funded much of his efforts. The Honolulu tree was planted in the gardens Foster and her husband Thomas had bought from the Hawaiian royal family in 1884. When Mary Foster died in 1930, she left the gardens including the Bodhi Tree to the public as Foster Botanical Gardens.

Bodhi Day is often celebrated through intensive day-long meditation, prayer and study. In the Japanese Zen tradition, the week leading up to Bodhi Day is devoted to intense meditation.

For 30 days beginning with Bodhi Day, Buddhists often bring a ficus or a sacred fig tree into their house in remembrance of the Bo (or Bodhi) Tree under which the Buddha sat during his 49-day meditation. The tree is often decorated with three brightly colored ornaments representing the Three Jewels: the Buddha, the Dharma (the way of Truth) and the Sangha (the community of those seeking enlightenment, or of the followers of Buddhism as a whole, a concept similar to the Muslim notion of the Ummah).


Traditionally on Bodhi Day throughout all Buddhist traditions, believers will eat (often as the morning meal) some combination of milk and rice. This has the following religious significance. The Buddha had spent the last seven of the 49 days of meditation without eating or drinking. On seeing Venus rising in the morning, the Buddha announced his attainment of Bodhi by proclaiming: "That's it! That's it! That's me! That's me that's shining so brilliantly!" At this point, the Buddha’s great disciple Sujata knew that the Buddha’s fast had ended and quickly brought the Buddha milk and rice to sustain Him.


In some traditions, Buddhists make sweet food (often cookies or candy) in the shape of a fig tree or in the shape of a heart with their children.  This helps the children associate sweetness with the goal of enlightenment.
﻿
During these 30 days, it is also common to decorate one's house. It is common to do so pipul fig leaves. These can be real leaves from living pipul figs or representative ones. In some Bodhi Day traditions, people make origami pipul leaves. The heart shape represents the heart-shaped leaves of the sacred pipul fig tree (ficus religiosa), the species of fig tree under which the Buddha sat when he attained enlightenment.


Many Buddhist decorate their house with colored lights. Others light a candle each day for 30 days. In both cases, the lights or candle represent the enlightenment attained by the Buddha.

Some Buddhists (especially in North America) have repurposed the Christian Christmas tree as a Bodhi Tree to serve a Buddhist end, with the lights on the tree representing the enlightenment of the Buddha.

As with all of my blog posts on religion, this is not an attempt to indicate proper practice, but merely to inform in a very general way. Buddhism is a rich and varied tradition, and there are many ways to observe Bodhi Day, none definitive.

Finally, there is no traditional greeting on Bodhi Day, although many people do wish each other a "Blessed Bodhi Day" or a "Happy Bodhi Day." 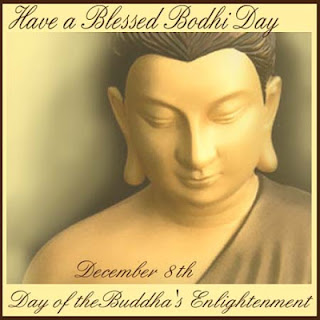