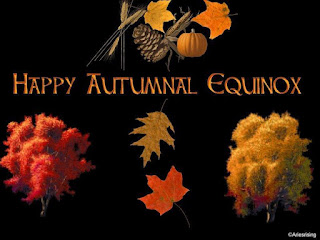 Today is the Autumnal Equinox. This is celebrated as a one of the four Major Sabbats in the eight points of the Wheel of the Year by people practicing Wicca, neo-Druidism and Paganism.  This holiday marks the time at which day and night are in total balance, and is accompanied by personal efforts of members of these faith to find a similar balance in their lives.


While this is a significant holiday for these faiths, it is not normally a day that would require the absence from class or work of faculty, staff or students. That said, the holiday is a time in which believers may wish to celebrate with family and could affect extra activities beyond the normal class or work day.
Different Approaches Toward the Autumnal Equinox

The Autumnal Equinox has several other names. These include the Harvest Moon or the Harvest Home for general usage. For Wiccans and many neo-Pagan groups, the preferred name is Mabon. For other neo-Pagan groups, the name preferred is Alban Elfed.  For neo-Druids, the preferred name is Mea'n Fo'mhair.
The separate holiday of  Michaelmas in Roman Catholic, Anglican, Episcopalian and Lutheran Christianity comes at the same time of year but is separate from these other holidays.
Relationship to Michaelmas

The separate holiday of  Michaelmas in Roman Catholic, Anglican, Episcopalian and Lutheran Christianity comes at the same time of year but is separate from the other holidays discussed here. Still, Wiccans, neo-Pagans and neo-Druids teach that Michaelmas actually was an attempt by the early Church to co-opt earlier pre-Christian worship practices associated with the Autumnal Equinox.
When Christianity first spread in the Celtic regions, the Roman Catholic Church placed great emphasis on Michaelmas which, falling on September 29, came near the same time. In this tradition the Archangel Michael came to represent the power of light over darkness, an important attribute as the length of daylight began to shorten.
Religious services honoring the Archangel Michael are still practiced in some Roman Catholic, Episcopalian and Lutheran congregations, especially in the United Kingdom.

The woodland harvest offerings described above are still practiced by neo-Druids and modern pagan ﻿ ﻿ ﻿﻿(largely in British, Irish and German traditions but with increasing practice in the US, Canada and New Zealand).  In this tradition, neo-Druids gather in wooded areas and  give offerings of the fall harvest (not only of berries but also of pine cones, acorns, apples and cider) to honor the Green Man of the Forest.
Alban Elfed and the Neo-Pagan Tradition
In some neo-Pagan traditions, the holiday is known as  Alban Elfed  or the “Light of the Sun.”  In this tradition, woodland offerings are proferred but to “The Lady” who is also called the “Spirit of the Land.”
Mabon and Wicca
The autumnal equinox holiday with the largest following is that associated with the religion of Wicca where it is called Mabon.  Unlike many other Wiccan holidays, no corresponding name exists in ancient pagan traditions. Instead, the name was coined by the US Wiccan leader Aidan Kelley soon after the formation in 1967 of the  NROOGD  (New Reformed Orthodox Order of the Golden Dawn), one of the most important popularizers of the Wiccan faith.  Kelley’s adoption of the name Mabon was to honor the early Welsh pagan divine son deity Mabon fab Mellt.
It should be noted that while Wicca (and with it the name Mabon) has been growing most rapidly in popularity among these tradition, in the UK and Ireland, many neo-Druids strongly oppose the term as a neologism. As a result, while it would be appropriate to wish a Wiccan a “Happy Mabon,” this may not be as appreciated for some neo-Druids and modern pagans.
Traditions
Cornucopia﻿﻿
﻿﻿
Both in ancient Druidic tradition and in modern neo-Druidic, pagan and Wiccan practice, offerings are often proffered in a horn of plenty called a cornucopia. As a result, Cornucopia is another name some practitioners use for the holiday.
﻿﻿As as side note, this is the same cornucopia that has been co-opted in the US tradition for the Thanksgiving symbol in November, itself an oddity since by this time the harvest has long been passed.
Altars
In most traditions, altar offerings of the harvest are proferred. In Wicca, altar offerings are customarily at home. In neo-Pagan and neo-Druidic traditions altar offerings are customarily set in the woods or forest.
In all three beliefs, the altar is normally set with symbols of the closing harvest. This includes dried corn and sheaves of wheat. Typical fall harvest items such as squash and gourds as well as nuts in their shells, root vegetables are also common offerings.
In many traditions, practitioners use agricultural implements (or lacking that, images or miniature agricultural implements) to complete the altar set-up. These usually involve baskets but also might include scythes and sickles.
In Wicca in particular, symbols of balance -- such as an evenly set of hanging scales -- are also used on the altar to symbolize the balance of day and night in the equinox.


Traditional Foods
In all of the autumnal equinox traditions -- Wiccan, neo-Pagan and neo-Druidic -- believers traditionally both make offerings of harvest foods as well as eat food and drink associated with the harvest.
Seasonal harvest items such as root vegetables and squash are common foods for the holiday. Nuts and things made with nuts are also commonly featured.
To incorporate the grains of the autumn harvest, bread (often called "mother bread")  is often a central food eaten during the holiday. One recipe for "Dark Mother Bread with Honey" is at
http://www.bing.com/images/search?q=+Mabon+recipe&view=detail&id=285A7AEEAF86C2C853E48D92C2F5F136CA60DADB&first=1
Finally, cider, juice and wine made from berries and apples are also common reflections of the harvest.
Conclusion
In my discussion of this holiday -- as with my handling of all others on this blog -- I am not attempting to indicated that one practice or another is proper or improper. My hope is only that this serves as a brief overview for general informational purposes. As always in these write-ups, I welcome your feedback. Please feel free to send me corrections or things you would like me to include next time (and feel equally free to let me know if you find these worthwhile).
May you have a balance in your life on this Autumnal Equinox. 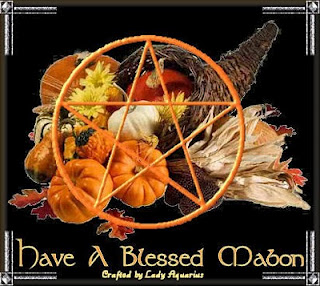