For 2021, Shavuot (or Shavuos) begins at sunset Sunday May 16 and lasts through sunset Monday May 17 for (most) Reform and Reconstructionist Jews and through sunset Tuesday May 18 for Conservative and Orthodox Jews.  This is a major holiday for Jews and employees, students, and others should be accommodated for religious observance.

Shavuot is determined by counting from Passover.  This is reflected in the name as the word “Shavuot” in Hebrew simply means “Weeks.” In English translations of the Bible, the holiday is usually translated as the “Festival of Weeks.”

Jews believe that Shavuot is the day in which the Lord gave the Torah (literally “the Law”, which refers to the first five books of the Bible) to Moses on .  An alternative name for Shavuot  -- Hag Matan Torateinu (The Festival of the Giving of the Torah) – recognizes this. One point emphasized here is that the Torah was given on this day rather than received.  The Jewish belief is that even though God gave the Torah on on Shavuot, it is up to every Jew to receive the Torah (that is to accept it and follow its teachings) anew with every day.

http://davidvictorvector.blogspot.com/2012/05/pentecost.html
Shavuot is one of the three festivals in Judaism linked to the harvest (the other two are Passover and Sukkot).  Unlike the other two harvest festivals, though, Shavuot has no ritual that would correspond, say, to the Passover Seder service or the building of a sukkah at Sukkot. For more on these two holidays, please refer to the earlier blog posts for

and for Sukkot at http://davidvictorvector.blogspot.com/2011/10/sukkot-hoshanah-rabah-shemini-atzeret.html

One explanation for why Shavuot has no similar ritual associated with it is sometimes attributed to the enormity of the event of the giving of the Torah.  As Michael Strassfeld in his book The Jewish Holidays puts it:

the Revelation at Sinai can be viewed as an experience so cosmic and mysterious that no ritual could encompass it, just as the Torah itself is so multifaceted that it eludes any attempt to delineate it. Like God who cannot be described, His Torah cannot be limited by a specific ritual or symbol other than the Torah scroll itself. (p. 72)

In the days of the Jewish Temple in , Shavout celebrated the offering of the first fruits pf the harvest.   It is for this reason that the holiday has yet another name: Yom ha-Bikkurim (Day of the First Fruits).

It is traditional for Jews – especially in the Orthodox tradition – to stay awake all night at the synagogue and to pray at the very break of sunrise.  The night is usually spent in Torah study groups called Tikkun Leil Shavuot.

In , thousands of pilgrims crowd the Kotel (the so-called Wailing or Western Wall, which is the only surviving remnant of the ) as dawn breaks to pray.

In addition to the shared studying of the Torah, Jews read two works aloud that are not from the Torah at this time: the Akdamut prayer and the Book of Ruth.

The first is the Akdamut prayer.  The Akdamut is a song of praise for the Torah written by Rabbi Meir of at some point in the 1090's before his death in 1095.  Late in his life Crusaders killed Rabbi Meir’s son (the killing of Jews in Europe was a common occurence among Crusaders en route to fight the Moslem Turks. After his son's death, Rabbi Meir was forced to explain in a public debate with the Church leaders responsible for his son’s death why he still believed in Judaism. His defense was apparently strong enough that he was not only allowed to live, but was allowed to continue to practice Judaism.  Following the public debate, Rabbi Meir wrote the Akdamut that is read on Shavuot.


The other reading is the Book of Ruth.  This book, though part of the Bible, is not part of the Torah.  Much debate as to why the book is read exists, but two of the more common explanations are that it takes place at the harvest of the first fruits and that Ruth (who is a convert to Judaism) accepted the Torah by choice.

Finally, Shavuot is one of the days in which Jews say Yizkor, the traditional remembrance observance for loved ones who have passed away.

Shavuot is a harvest festival. To acknowledge this, many Jews decorate with harvest symbols, sheaves of wheat or baskets of fruit. This is particularly a practice in some kibbutzim (collective farms) in Israel where such decorations actually come from the local harvest, although Jews all over the world often use the harvest motif even if they live far from any actual harvest themselves.

Because the Bible indicates that the Israelites were told not to allow their flocks to graze on Mount Sinai, it has been traditional at Shavuot to decorate worship places and homes with plants and flowers during the holiday. This somewhat obscure association that such a warning could be made only if the area were already green with plants in the midst of the dessert is nonetheless one of the oldest recorded traditions historically tied to the holiday.

Some Jewish traditions consider Shavuot a day of judgement for tree and say prayers for the trees. Even in those traditions without this belief, some Jews still decorate with trees in pots and tree branches. Because the Torah brings sweetness to people's lives, many Jewish congregations distribute sprigs of sweet-smelling myrtle to worshippers.

Finally, it is very common to decorate with flowers, and especially lilies-of-the-valley and roses. This harkens back to the harvest motif again, but has another significance.

In the Song of Songs (2:1-2),  the beloved one (who in some Jewish interpreation is at once a lover and a metaphor for Israel) is compared to lillies-of-the-valley. Therefore, lilies-of-the-valley (and often simply lilies) are used as symbols of the Lord's love for Israel in giving the Torah.

In the Book of Esther (which is actually not related to Shavuot at all, but to Purim), a line reads "And the decree was proclaimed in Shushan" (Esther 8:14). In a rather convoluted logic, the word "decree" has been associated with the "law" or the Torah. Hence the Torah was proclaimed in Shushan. Shushan was the capital of ancient Persia, but it is very similar to the Hebrew word for rose (Shoshanah) so the pun is used as the basis of the link of roses to the Torah.

By tradition, Jews traditionally eat a dairy meal at least once on Shavuot.

Several traditions are associated with the eating of dairy. Among these is the belief that the Torah as nourishing as milk is to a child. Another association with dairy is numerological in nature. All Hebrew words have numerical equivalents since Hebrew letters are used for numbering as well as for writing words. The letters of the  Hebrew word for dairy -- chalav -- add up to the number 40, which is the number of days that the Bible indicates that Moses spent on Mount Sinai receiving the Torah. Another tradition suggests that when the Israelites received the Torah, the realized that they could no longer mix milk and meat (one of the requirements of keeping kosher) so they had to eat dairy until they could make their cooking utensils kosher.


Whatever the reasons behind it, Shavuot has become a time for Jews to focus on cooking dairy dishes.  In particular, the cheese blintz is associated with the holiday among the Ashkenazi (Jews with Eastern and Central European backgrounds). A recipe for traditional cheese blintzes can be found at

A more modern, Israeli recipe for cheesecake with nuts can be found at


As with all posts on religion on this blog, these remarks are meant only as one person's understanding of religious holidays and attendant observances. This is not meant as a guide to practice or as a stance on what is acceptable or unacceptable practice. Observances vary. If you would like to comment on your own observances or add more information, I welcome you do to do so. 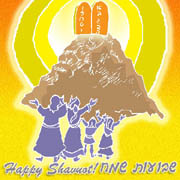 "Shavuot: The Giving of the Torah," Chabad.org, http://www.chabad.org/holidays/shavuot/default_cdo/jewish/Shavuot.htm

Moses with the 10 Commandments: http://www.netglimse.com/holidays/shavuot/customs_and_traditions_of_shavuot.shtml