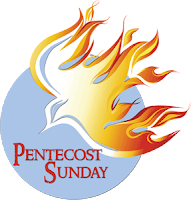 Pentecost is the last holiday in the Christian Moveable Feast Cycle, and celebrates the descent of the Holy Spirit among the followers of Jesus in general and of the Apostles in particular. For 2022,  Pentecost falls on Sunday June 5 for the Roman Catholic and Protestant traditions; and on June 12 for the Eastern Orthodox, Oriental Orthodox and Coptic traditions. 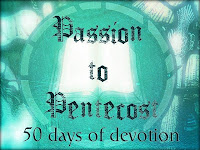 In several traditions, the holiday lasts for three days, with the following Monday and Tuesday recognized as part of the holiday. In 16 nations, Pentecost Monday is a national holiday: , , , , , , , , , , , the , , , , and . The Monday after Pentecost is also the secular Spring Bank Holiday in the (having formerly been a national religious holiday until 1967).

OTHER NAMES FOR PENTECOST

In the Western tradition the names for Pentecost derive from some version of either the Greek or German for “fiftieth.” Thus, the holiday is called Pentecostés in Spanish, Pentecôte in French, Pfinngsten in German, Pinksteren in Dutch and so on.

In , the holiday is known as Whitsun or Whitsunday, with the three-day period through the following Tuesday known as Whitsuntide. This comes from the shortening over time of the original “White Sunday,” with “white” symbolizing the dove of the Holy Spirit. As noted above, Whit Monday was an official holiday in the until 1967 when the holiday was officially secularized and renamed the Spring Bank Holiday.

In the Orthodox tradition, the holiday is frequently called some version of “Trinity Sunday” with the following days known by some variant of this such as Spirit Monday and (for the following Tuesday) Third Day of the Trinity. The entire week following Trinity Sunday is considered an Eastern Orthodox Afterfeast in which fasting is not allowed.

Pentecost is closely associated with the Jewish holiday of Shavuot. Indeed, some Christians actually refer to the Old Testament references to Shavuot as Pentecost. This is never done by Jews themselves though.

The close association between Shavuot and Pentecost is because the first Pentecost occurred while the Apostles were celebrating Shavuot for the time following the Crucifixion.  The religious parallel of the two holidays is often emphasized with Shavuot representing the giving of the Torah to the children of at and with Pentecost representing the Descent of the Holy Spirit to the Apostles gathered to celebrate Shavuot 50 days following the Resurrection of Jesus. For more on the Jewish holiday of Shavuot, please see my earlier blog at


In the Book of Acts, the Apostles and followers of Jesus are described gathered in one place at which time the Holy Spirit descended about them:﻿ ﻿ ﻿﻿

When the day of Pentecost came, they were all together in one place.
Suddenly a sound like the blowing of a might wind came from heaven and filled the whole house where they were sitting.
They saw what seemed to be tongues of fire that separated and came to rest on each of them.
﻿﻿﻿ ﻿﻿﻿﻿﻿﻿All of them were filled with the Holy Spirit and began to speak in other tongues as the Spirit enabled them. Acts 2:1-4 ﻿


Of notable importance is the theme of descent of the Holy Spirit on the first Pentecost as a major subject for Christian art for centuries into the present day.. Notable paintings include those by Giotto, Maestà, Anthony van Dyck, El Greco, Joseph Ignaz Mildorfer, Fernando Gallego, Mikhail Vrubel and Peter Paul Rubens, among others.

In more modern art, the first Pentecost has been a subject for the Expressionist period artist Emil Nolde and the Japanese Naive School artist Sadao Watanabe.


The Book of Acts describes a specific event at a specific time, a belief that Christians of all sects and denominations share. What is much more subject to argument, though, is whether or not the descent of the Holy Spirit described there is about a one-time event or is something that is possible for others at other times. As Dennis Bratcher explains:


There is much debate in some circles about exactly what happened at Pentecost, whether it is a repeatable event or only for the early church, or whether it should or should not become a paradigm for personal religious experience. Those who advocate it as a paradigm are sometimes termed Pentecostals, although that term usually refers more specifically to church traditions who advocate speaking in "tongues" or a special Spirit-inspired prayer or praise language.http://www.crivoice.org/cypentecost.html

OBSERVANCES
In the Western Roman Catholic, Anglican and Episcopalian traditions, special prayers are recited on Pentecost. Priest wear red vestments (and some congregants wear red as well). This because red symbolizes the fire of the Holy Spirit.

In many traditions, banners are hung as decorations to symbolize the “mighty wind” described in Acts 2:2. In some national traditions (notably those in and ), the “mighty wind” is symbolized through playing brass instruments. The playing of organ music or choral pieces also takes this role, and Johann Sebastian Bach wrote several cantatas for the holiday, including the famous Gelobet sei der Herr, mein Gott (Praised be the Lord, my God), which was first performed in Leipzig Cathedral on Pentecost Sunday, 1726.

In (and especially in ) rose petals are scattered about and dropped from above on congregants during specific times.

In both Roman Catholic and Protestant traditions, churches are decorated with images of doves, as the dove is the symbol of the Holy Spirit. In some traditions (especially in Italy), giant wooden doves are lowered over the congregation. Much more commonly worldwide, dove decorations are placed around the church and home.

Both Protestant and Roman Catholic traditions recognize Pentecost as the "birthday of the church." In some Protestant traditions, particularly in North America, believers bake a birthday cake for the holiday. It should be noted that the Eastern Orthodox strongly disagrees with this concept, believing that the Church as an institution exists outside of time and therefore could not have a birthday.

Given particular significance in both Roman Catholic and Protestant practice, are the following lines from the Book of Acts:

Now there were staying in God-fearing Jews from every nation under heaven. When they heard this sound, a crowd came together in bewilderment, because each one heard their own language being spoken. Acts 2:5-6

Because of this, it is traditional in both Roman Catholic and Protestant traditions to read this line from Acts 2:6 in as many languages as possible, particularly highlighting the languages spoken already by those present.

In the Eastern Orthodox tradition, the holiday is, as noted above, called Trinity Sunday. Its formal name is actually “The Solemnity of the Most Holy Trinity.”  They recite the Liturgy of Saint John Chrysostom and sing several special prayers. On Sunday evening at what is called the Great Vespers, worshippers have a prolonged service in which they kneel for the first time since Pascha (Orthodox Easter). In some practices, this includes fully prostrating oneself on the ground. During the kneeling worship, three prayers are highlighted: one for repentance, a second  asking for the Holy Spirit to provide guidance, and the last in remembrance of those who have passed away.

Similarly, it is traditional in many Eastern Orthodox traditions to decorate with tree branches and foliage, intentionally done to recall the Jewish practice of decoration with trees and flowers at Shavuot (which they believe Pentecost supplants).

As with all of the blogs on religious observance, this blog post is meant only as one person's understanding of religious holidays and attendant observances. This is not meant as a guide to practice or as a stance on what is acceptable or unacceptable practice. Observances vary.

As always, if you would like to comment on your own observances or add more information, I welcome you do to do so. 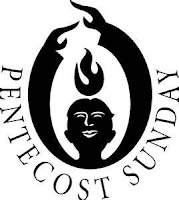 Scott P. Richert, "Pentecost 101: Everything You Need to Know About Pentecost in the Catholic Church," About.com - Catholicism: http://catholicism.about.com/od/holydaysandholidays/tp/Pentecost_101.htm