Rise of the Pirates in Berlin

The Berlin election this past Sunday brought some surprises. Chief among these was the official emergence of Germany's newest political group: the Pirate Party which was formed in 2006.

With 8.9% of the vote in the city-state of Berlin, the Pirate Party burst past the 5% threshold for parliamentary representation in Sunday's election.

* Note: 2011 results from Deutsche Welle ( see http://www.dw-world.de/dw/article/0,,15397392,00.html  ) The 2006 returns were from the Bundeswahlleiter official count, (not from DW) at http://www.bundeswahlleiter.de/de/landtagswahlen/ergebnisse/downloads/lwberlin2006.pdf

Throughout the Berlin election, signs read "Privatize Religion" and "Inform Yourself" along with the more light-hearted "Arrrr" (German for the English piratese "Aargh" I suppose). 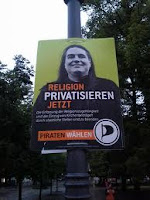 Spiegel Online covers the rise of Germany's newest substantial political party: The Pirate Party at http://www.spiegel.de/international/germany/0,1518,787044,00.html . The title of the article "The New Rebels" says a lot about the Pirates' new role. Sebastien Nerz, head of the German Pirate Party is quoted in the article as saying "It's the first time since the 1980s that a new political power has come onto the stage," a comment he prefaced with the response "Cool!"

So what do the Pirates stand for? As with all of Europe's new Pirate Parties, the German version wants Internet freedom and restrictions on the collection of data from electronic communication of any sort. The German Pirate Party, though, has more of a platform than the one topic. They advocate what Spiegel Online describes as an "unconditional basic income" as well as increased transparency in government and the legalization of soft drugs. These are not lighthearted or lightweight positions.


If the Pirate Party was the great winner in the Berlin election Sunday, the biggest loser was the center-right, pro-business FDP (Free Democratic Party) which dropped precipitously from 7.6% of the vote to a mere 1.8%, far below the 5% threshold needed for representation). This was even below the 2.1% won by the neo-Nazi National Democrats and just slightly more the such one issue splinter parties such as the animal-rights party (Mensch Umwelt Tierschutz) at 1.5% and the extreme right-wing Bürgerbewegung pro Deutschland with 1.2% of the vote. In short, the FDP has ceased to be a presence in Berlin at least, which may not bode well for its standing nationwide.

Another notable loser (if not on the scale of the FDP) was with The Lefts (die Linke). This needs some explanation as the Lefts only formed in 2007 when the post-Communist PDS (or Party of Democratic Socialism) merged with the WASG (in German the Arbeit und soziale Gerechtigkeit – Die Wahlalternative or Labor and Social Justice -- Vote Alternative party). The PDS grew out of the SED that rule Communist East Germany and had 13.4% of the 2006 Berlin vote. The WASG, in turn, carried 2.9% of the 2006 Berlin vote, which was not enough to cross the 5% threshold for representation. Since the Left Party was the combination of the two earlier parties, this represents an even greater loss for Lefts over the PDS, since we should see this decline despite the the addition of the WAPG vote to the total (which would have been a total of 19.3% in 2006, so that the Left's drop to 11.7% would account for a real loss of 7.9% rather than the apparent loss of only 1.7% that seems the case at first glance.

Soooo... what does this mean, if anything, to the rest of Germany or to the world outside of Germany? As I see it, four things:

1) The Pirate Party movement ought not be discounted out of hand. The issue of Internet and electronic communication freedom is a hot topic right now due to the scandals with the News Corporation, but at least in Germany the Pirate Party has taken positions on issues that go well beyond that which might well give them a greater appeal as they mature.

2) The Berlin vote gives the Pirate Party considerable credibility for future state-level elections. It is too soon to tell if this is a one-off anomaly or the beginning of a trend. Germany to date has 155 Pirate Party members elected to municipal positions. The election to the state government level should encourage people to cast their vote with the Pirate Party in the future who might have thought that a waste of their vote before. This was the pattern the Greens followed as they rose from obscurity in the 1980's to a major player in German national politics by the 1990's.

3) The Berlin Pirate Party victory has implication beyond Germany. In 2009, Swedes elected two Swedish Pirate Party members to the European Parliament (with 7.13% of the overall vote) and a handful of Pirate Party politicians have been elected to municipal level positions already in the Czech Republic, Switzerland and Spanish Catalonia. The substantial win of the German Pirate Party in Berlin could well have a motivating effect in these countries and beyond.

4) The FDP's poor performance in Berlin may indicate a cause for it to worry. The FDP, the junior partner of Angela Merkel's CDP/CDU coalition, is appearing vulnerable. If the Berlin state elections are any indicator, this may mean the weakening of the pro-business parties that have been governing Germany since 2005. A government coaltion that would include some representation from the Pirate Party, the Greens and die Linke is not out of the question. This could possibly have an effect on Germany's economy and with that, the whole of Europe. That is at least worth keeping in mind.