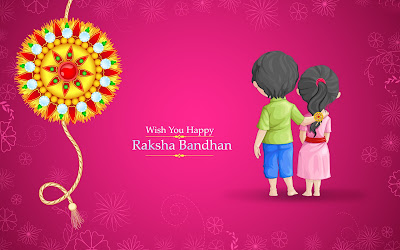 Raksha Bandhan (or simply Rakhi) is a holiday celebrating the love between brother and sister in the Hindu, Jain and some Sikh traditions.  In 2017, the holiday falls on Monday, August 7.

Raksha Bandan celebrates the special bonds between brothers and sisters.

On the morning of Raksha Bandhan, sisters tie a special string or band around the wrist of their brothers. The band is call a "rakhi" and may vary from a plain but brightly-colored string to an elaborately decorated wristband (or even a piece of jewelry for some people).  It is customary for both brother and sister to dress up in fine clothing for the ceremony and for the string to be tied while the rest of the family (parents, grandparents and so forth) watch the ceremony.

When the sister ties the band around, she says a prayer for the health and well-being of her brother. The sister performs aarthi, in which she ritually moves a lighted diya (stone or metal lamp) around her brother's face. After this, the sister place a tikka or tilaka (a mark of brightly colored powder or paste) on her brother's forehead.

Some of the most common sweets given include vermicelli kheer (dried pasta with cardamom, saffron, mal pua (a fried, sugary dumpling soaked in syrup).  Recipes for all of these can be found at the Society for the Confluence of Festivals of India's "Rakhi Recipes" website at: http://www.raksha-bandhan.com/rakhi-recipes.html
nuts and dried fruits), banana "cutlets,"and

In Nepal, instead of sweets, sisters feed their brothers kwati, a special soup for the holiday. Kwati is
made of the sprouts of nine plants: chickpea, soybean, field pea, garden pea, cowpea, field bean, rice bean, green lentil and black lentil

It is customary for the brother to wear the tikka mark and the rakhi wristband for the entire day to school or work.

"Raksha Bandhan," Society for the Confluence of Festivals in India: http://www.raksha-bandhan.com/rakhi-traditions-and-customs.html