The PISA tests were run by the Organization of Economic Cooperation and Development (OECD) covering the performance of 15-year-olds in math, science and reading literacy. According to the report,


"Around 510 000 students between the ages of 15 years 3 months and 16 years 2 months completed the assessment in 2012, representing about 28 million 15-year-olds in the schools of the 65 participating countries and economies."

The 2012 report, it should be noted, is counting Shanghai as a separate economy, so there are really only 64 separate nations (counting Hong Kong and Macau as separate as well). China itself was not surveyed as a whole.

The survey covered all 34 members of the OECD as well as 31 non-OECD members.The nations are shown on the map below and listed in the box below. 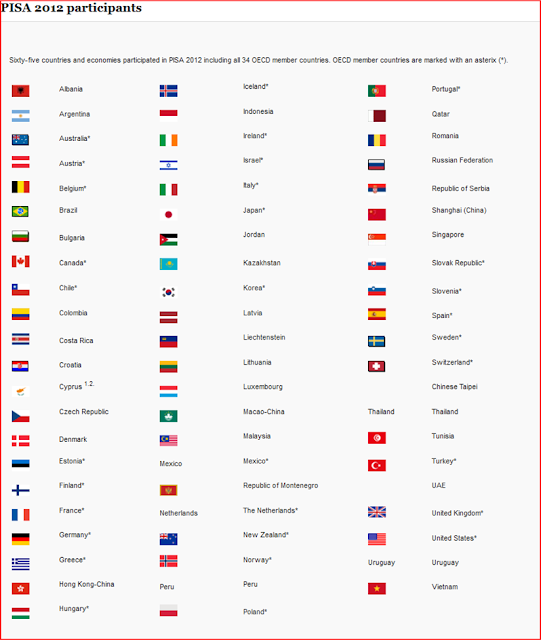 
Overall, the state of world education is improving -- at least as far as test scores indicate for those nations assessed. Of the 65 participating countries, 25 improved over previous years as an average across all three area. For reading literacy, the results are even more notable with 32 nations showing improvement over previous years.

Shanghai was tested as a separate entity. It ranked at the the top in all categories. Shanghai's mean score was 613. This was 119 points higher than the OECD average (an equivalent different of three years education).

Of note, the PRC as a whole did not participate. Only Shanghai was tested within the Mainland, while the separate entities of Hong Kong and Macau were included independently.

The top 10 performers for 2012 in each category included seven that were in the top ten in all three categories: Canada, Finland, Hong Kong, Japan, Shanghai, Singapore and South Korea.

The worst performing participating nation was Peru, ranking 65th of 65 in all three categories.  The five worst-performing participating nations were Jordan (61), Colombia (62), Qatar (63), Indonesia (64) and -- as mentioned already--  Peru rounding off the very bottom. The bottom five jockeyed for position of worst in the different areas. For example, Colombia and Qatar tied for third worst math score with Indonesia as the second worst math score but both Colombia and Indonesia outperformed Qatar in reading scores, and so on as the chart below shows.

As for the US, the news was not so good. While most nations improved -- many dramatically so -- the US average in all three fields (math, science and reading literacy) remained unchanged from each of the last three assessments. In other words, the United States has had virtually the same performance (we're consistent at least) each year. To quote the US summary:


Among OECD nations, the rankings are equally distressing with regard to the United States. For math in particular, the scores are grim. The US ranked 26 out of 34 with 1/4 of US students unable to get beyond the lowest (of 6) levels. For science, the US ranked 21 out of 34 in the OECD. For reading the US did better, ranking 17 out of 34 (still below but nonetheless nearer the OECD average).

Significant regional differences within countries were noted as well. For example, in Italy math scores for the nation as a whole were 485, below the OECD mean average of 494. However, when broken into regions, the story was different.

When considered separately, Trento (at 524) and Friuli Venezia Giulia and the Vento (both at 523) had among the highest mean averages worldwide By contrast Sardina (at 458), Campania (at 453) and Sicily (at 447) were far below the OECD math average of 494.

Similarly, the US overall score of 481 in math was below the OECD average, but when Massachusetts was considered independently, the state ranked among the world leaders at 514 (tied with Germany as a nation).

For those wanting to read the report themselves, please go to the links below.

The PISA 2012 link on the OECD main site is at: http://www.oecd.org/pisa/keyfindings/pisa-2012-results.htm

Also, many nations have their own summary links. Here, for instance, is the US summary link: http://nces.ed.gov/surveys/pisa/pisa2012/

Finally, in closing, it should be noted that the PISA results do not directly correlate with economic success. The  test scores only measure test-taking ability -- and even then only in math, science and reading literacy.  The tests do not cover creative activity or innovative thinking. Both of these are traditionally considered US strong points in global competitiveness, for example, but remain unmeasurable under the current testing.

Nevertheless, the implications of the PISA report is a significant for competitiveness in an economy that increasingly requires greater education.

This was my reading of the results. Please do share your views with me and let me know what you think.

Bottom 5 PISA Performers table: Own compilation based on PISA report

US Flag:  http://www.bing.com/images/search?q=Printable+Pictures+of+USA+Flag&Form=IQFRDR#a
Posted by David A. Victor, Ph.D. at 11:47 AM