Announcement of the Promised One
Riḍván marks the announcement by Mírzá Ḥusayn-`Alí Núrí that he was the Bahá'u'lláh or Promised One and Messenger of the One True God.


The Bahá'u'lláh made his announcement that he was the Promised One on April 21, 1863 in what was then called Najibiyyih Garden or Na’Mayn on the outskirts of Baghdad on the banks of the Tigris River. At the time what is today Iraq was part of the Ottoman Empire, and the Ottoman authorities had banished the Bahá'u'lláh. Fearing a threat to the dominance of Islam in Baghdad, the Ottoman religious officials formally exiled in Constantinople to remove him from his growing throngs of followers.
The Bahá'u'lláh stayed in Najibiyyih Garden for 12 days following his announcement. During this time he greeted his followers who came to meet with him before his exile. On the ninth day, the Bahá'u'lláh’s family arrived (the Holy Family having been delayed by the flooding of the Tigris up to that point).  On the twelfth day, the Ottoman authorities forcibly removed him to take him to prison in Constantinople. His followers then renamed the site as the Garden of Ridván (Paradise) which it is called today and which is from where the holiday takes its name.
The Three Declarations in the the Garden of Riḍván
While in the Garden of Ridván, after announcing himself to be the Promised One, the Bahá'u'lláh made three additional declarations. These were revealed in the Tablet of Ridvan.
﻿﻿﻿
﻿﻿﻿﻿﻿﻿﻿﻿﻿


He Who is the Desire of all nations hath shed upon the kingdoms of the unseen and of the seen the splendor of the light of His most excellent names, and enveloped them with the radiance of the luminaries of His most gracious favors -- favors which none can reckon except Him, Who is the omnipotent Protector of the entire creation. – “The Tablet of Ridván,” Gleanings from the Writings of Baha'u'llah


Ridván Observance
Ridván is generally observed by refraining from all work on the first, ninth and twelfth days accompanied with communal prayers in the temple or gatherings in people's homes for worship services.  Beyond that, customs vary widely (as with the observance of all Baha’i holidays). Indeed, while the days of refraining from work are clearly indicated, the only formal requirement for communal prayers specifically laid out is that on the first day of Ridván at 3:00 PM (marking the time Bahá'u'lláh first entered the Garden of Ridván). Still, most Baha’i traditions customarily mark the ninth and twelfth days with communal prayers as well.  Additionally, many Baha’is go to the temple for communal gatherings on each day of the festival, although they still go to school or work on these other days.
Riḍván is also the time when Baha’is hold their annual elections for the nine-person local Spiritual Council. Each elected local Spiritual Council member holds this religious office for one year until the next Ridván.
While traditions beyond this vary greatly, among the most common customs among Baha’i congregations is the outdoor gathering for a communal picnic in a local garden or other green area as a remembrance of the Garden of Riḍván.
﻿
﻿

Some Baha’i families re-enact scenes from the Bahá'u'lláh’s time in the Garden. For example, on the ninth day, children make symbolic boats to cross over the flooded Tigris River as the Bahá'u'lláh’s family had done.

Other Baha’i traditions include displays of flowers such as roses to recall the garden setting.  People often decorate with assemblages of 12 items (such as twelve flowers or twelve Baha’i stars) to symbolize the twelve days that the Bahá'u'lláh stayed in the Garden of Ridván.
Conclusion
As with all of my religious observance posts, this discussion of the holiday Ridván reflects only my superficial summary of the holiday. This post in no way intends to indicate what is or is not the proper way in which to celebrate the holiday from a theological perspective. The intention here is only informational.
Please feel free to leave a comment on your own observances or on anything else in this post. I welcome your input. Happy Ridván! 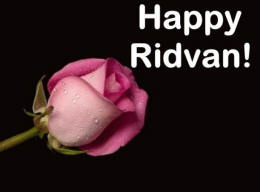