Monday, January 23 marks the start of the Asian Lunar New Year  or Chinese New Year. It is the beginning of the year 4709 (in some traditions, 4710) in the Chinese system, which is the Year of the Water Dragon.

Today's post is the first in what will be a series of posts discussing the Asian Lunar New Year in general and the Year of the Dragon in particular. Today, we will look at some of the business impact of the event. Future posts will look at the background and significance of the Asian Lunar New Year from both cultural and religious perspectives as well as the significance of the Year of the Dragon itself this year. Other posts will discuss ways in which this holiday is celebrated in different cultures. A final post will point out major Year of the Dragon celebrations and parades around the world.

The Asian New Year is arguably the most widely celebrated holidays on the planet, whatever the year. Because the celebration generally means that families gather together, the holiday is annually the single busiest travel day. For example, during the Chinese New Year last year in 2011, an estimated 2.556 billion passenger trips took place within the PRC alone.
http://www.chinainternetwatch.com/865/cny-2011-travel/

This year, the rush has already begun, with the official Chinese travel season starting on Sunday, January 8.  PRC government officials estimate that this year there will be 3.2 billion travelers in China.
This puts considerable pressure on China's travel infrastructure.  Speaking to Agence-France Presse news, China's chief transportation official Liu Tienan estimated record numbers for the Year of the Dragon, indicating that the People's Republic of  China would see 2.55 billion road passengers (an 11.6% increase) and 32 million air trips (an 10.8% increase).

Year of the Dragon Baby Boom and Marriages

As will be discussed in upcoming posts, people born in the Year of the Dragon are generally considered natural leaders and merit respect and honor. It is therefore a very auspicious year in which to be born. As a result, the Year of the Dragon results in a baby boom in East Asian countries every 12 years.  As China Radio International explained in a recent broadcast:

Experts predict births will climb by five percent because the icon of 's emperors symbolizes power and wealth. The emerging dragon year baby boom in the country is expected to provide lucrative business opportunities for infant-products makers and early-learning institutions from home and abroad.
http://english.cri.cn/8706/2011/11/29/2203s669403.htm

Nor is this at all limited to the PRC. Baby booms are expected throughout . Singapore
is expecting between a 10-20% increase in babies for the year and is expecting a 20% increase.  The trend is entirely predictable each time the Year of the Dragon appears in the 12-year cycle.. As the Times notes:


Likewise, Vinicy Chan explained in Bloomberg Business Week, sales are expected to spike in for a wide range of products including strollers, baby chairs, diapers and baby formula. For the full article, please see http://www.businessweek.com/printer/magazine/year-of-the-dragon-may-give-chinas-economy-a-lift-12082011.html

Indeed, the impact has already been felt. For example, ’s fertility clinics hit record numbers in 2011 as parents tried to ensure that they would have children in the Year of Dragon. Relatedly, elite hospitals in , , and have all experienced bookings, as have nearby hotels. As an example, the Korea Herald reported that reservations for February 2012 increased by 130 percent at the Seoul Palace Hotel and by 30 percent each at Westin Chosun Hotel and J.W. Marriott Hotel compared to the same month this year. Other venues where reservations did not dramatically increase yet are closely observing the fuss about the black dragon year.
http://www.koreaherald.com/lifestyle/Detail.jsp?newsMLId=20111230000343 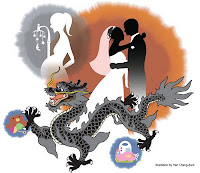 Another reason for the increased hotel reservations is that it is also considered good luck to marry during the Year of the Dragon. The Wall Street Journal, for example, reported that marriages in are expected to spike by 12% in the Year of the Dragon.  In alone, 60.000 couples have already registered to be married over the year. Throughout , couples have been encouraged not only from the good fortune of the Dragon Year but from the added good fortune of the leap year in the spring. As Isabel Steger in the Wall Street Journal explains:

Not only is it a Dragon year, but it’s also a leap year, according to the Chinese lunar calendar, with 13 months. The extra month is to synchronize the lunar year, which has 354 days, with the astronomical year, which has 365.25 days. The extra month makes it possible to have two “springs” in the year, which is auspicious. In Chinese, the word “spring” has connotations of fertility. http://blogs.wsj.com/chinarealtime/2012/01/06/hong-kong-developers-look-to-the-dragon/


Gold Sales and the Year of the Dragon

Also affected by the Year of the Dragon is the price of gold. Since the Year of the Dragon is associated with wealth, many gifts given at the time will be made of gold to reinforce the symbolism. This, in turn, affects the demand for gold. Indeed, the International Business Times of Singapore reported a 20% increase in sales among jewelers and private mints.
http://au.ibtimes.com/articles/272816/20111226/gold-buying-up-singapore.htm

﻿﻿ ﻿
﻿﻿﻿ In the PRC, Bullion Street and other gold sales monitors report that shops selling gold bars, gold dragons and related gold items have been so heavy that by the first week of January many retailers have been unable to meet demand. Additionally, jewelers and small shops that never before had sold gold bars are now opening up sections devoted to doing so for the course of the New
Year.
﻿

Special Year of the Dragon gold coins have been issued in limited editions by the Perth Mint in Australia, the Singapore Mint, the Royal Canadian Mint, the People’s Bank of China, tje New Zealand Mint, and Monnaie de Paris, the Mint of Finland, and the Mints  of the tiny Pacific nations of Niue and of the Cook Islands.

Because dragons and tigers are compatible animals in the Chinese zodiac, Tiger Beer is running special promotions to capitalize on this. Sean Koh, marketing manager for Tiger Beer explained at the Year of the Dragon promotion launch:


The potent union of the Tiger and the Dragon is symbolic to an auspicious celebration this Chinese New Year. http://www.mmail.com.my/content/88391-time-tiger

Consumers buying Tiger beer (or its partner beers of Guinness, Anchor and Heineken) have the chance of winning one of 90,000 prizes of gold sets or cash. The promotion is directed at the Year of the Dragon celebrations, having started in mid-December and will run through February 6.


Nike has released a special "Year of the Dragon Pack" which they describe in a press release as follows:

All of the shoes will include iconography that pertains to the Chinese New Year and the cultural effect it has on its people. For example, the Nike Air Force 1 actually uses a black silk texture to symbolize Chinese royalty.  The Air Jordan 2012 takes the number 9, which is a sign of power and achievement, and tie that in to Michael himself.  Kobe is a little more multicultural, drawing from his Italian roots and his love of Kung Fu movies for his Nike Zoom Kobe 7 entry.  But Kevin Durant might be headliner of this pack since he was born in 1988, a Year of the Dragon.  There will also be a Nike Destroyer Jacket that comes in a special pack with the Air Force 1. http://www.examiner.com/nike-in-national/nike-year-of-the-dragon-pack-officially-revealed

Kikkoman soy sauce has published a special (and quite extensive) Year of the Dragon celebration booklet, with accompanying video and recipes. For the US version, please see  http://www.kikkomanusa.com/homecooks/offers/downloads/pdfs/kk_CNY2012.pdf

For the Chinese elite market, Rolls Royce has begun selling special dragon-themed commemorative vehicles. These are enhanced with dragon embroidered interiors and hand-painted coachlines with themes adapted from Forbidden City designs. This is Rolls-Royce's first such special issue car for China, and points to its growth in that market (which is now its second largest market after the United States).
Finally, the Year of the Dragon is associated with risk-taking. Consequently, entrepreneurship and venture capital investments traditionally may also be affected positively in .


Check Back for More

I hope this has whetted your appetite. Please check back for more in the coming days when you can read about the background and significance of the Asian Lunar New Year, the significance of the Year of the Dragon, how the holiday is celebrated in different cultures and where to find major Year of the Dragon celebrations and parades around the world.

Gung Hay Fat Choy! (May prosperity be with you!)

Vinicy Chan, "Year of the Dragon May Give China's Economy a Lift," Bloomberg BusinessWeek, http://www.businessweek.com/printer/magazine/year-of-the-dragon-may-give-chinas-economy-a-lift-12082011.html